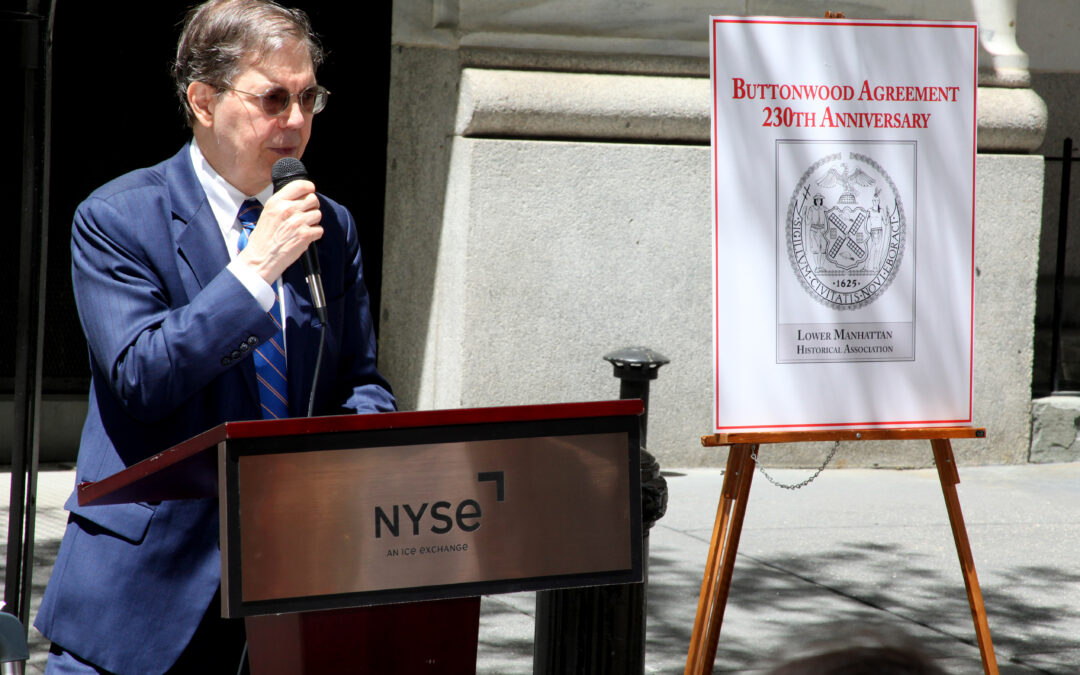 Peter C. Hein, President of the Sons of the Revolution, that also runs the Fraunces Tavern Museum, speaks at the 230th Anniversary of the Buttonwood Agreement ceremony, on May 17, 2022. Photos: Rick Edwards for LMHA

On May 17, 1792, 24 stock brokers trading largely in government securities got together under a buttonwood (“sycamore”) tree, to sign an agreement, forming what today is the New York Stock Exchange.

There were speakers in attendance from the New York Stock Exchange, the Sons of the Revolution in the State of the New York (and owners of Fraunces Tavern Museum), Manhattan Borough President Mark Levine, Downtown Alliance NY, the Museum of American Finance, among others.

“The Lower Manhattan Historical Association was thrilled to bring together local elected officials and leaders from downtown cultural, civic and commercial organizations for the First Annual Ceremony, honoring the 230th Anniversary of The Buttonwood Agreement. This historic agreement, signed by twenty-four of New York City’s leading merchants of that era, was the founding document of what is now the New York Stock Exchange and is one of the most important financial documents in the country,” said Catherine McVay Hughes, Director, LMHA, and longtime member of Community Board 1.

Peter C. Hein, President of the Sons of the Revolution in the State of New York, that also run the Fraunces Tavern Museum, commended the anniversary; he also announced a new exhibit that will be unveiled later in June. “In 1785, after the Congress then operating under the articles of the Confederation, relocated the capitol to New York City, Fraunces Tavern became our nation’s First Executive Office Building,” said Hein. The new exhibit will be called Governing the Nation from Fraunces Tavern, opening June 22. It will recreate America’s first Confederation-era Department of Foreign Affairs in New York City, when it was located at Fraunces Tavern together with the Department of War and offices of the Board of Treasury from 1785 to 1788.

“There was a notorious stockbroker that was trying to corner the market, and conducted insider trading, and so this agreement was signed to actually add regulation to that industry… Thinking about that agreement, just reminds us why regulation is important, because it builds trust. When those 24 members got together, they were building trust in an institution. They were building trust for everyday traders, everyday stockbrokers, to invest here in our city, in our country,” said New York City Councilmember Chris Marte, who represents The Lower East Side.