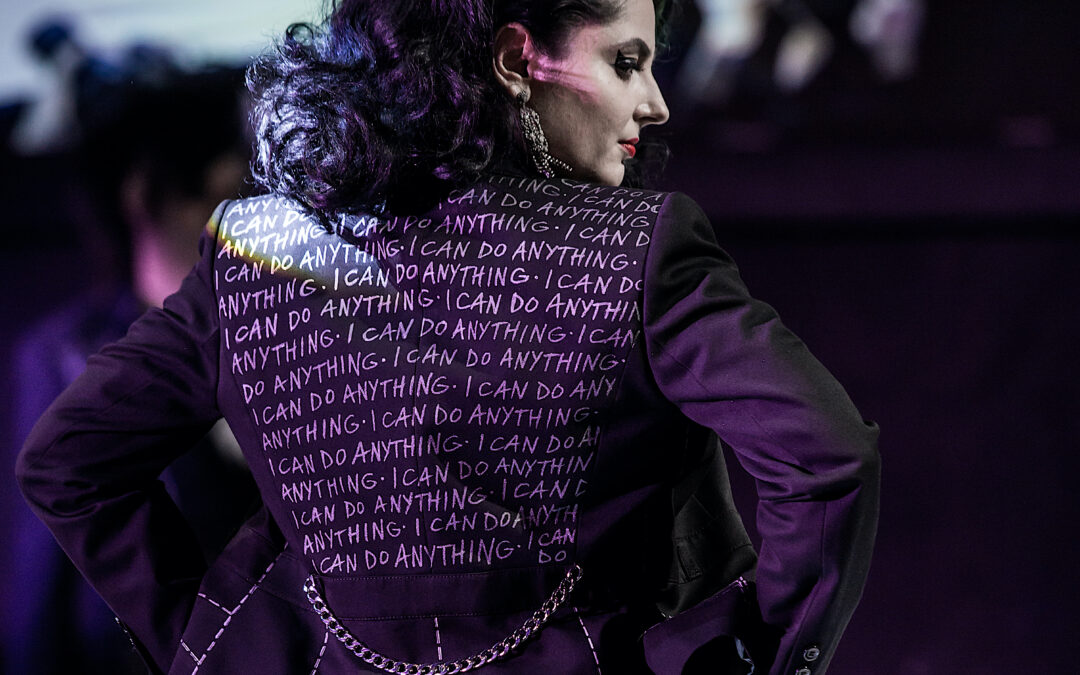 Before New York Fashion Week got underway, Downtown had the opportunity to speak with DIY-designer Alisha Amnesia of Punk Majesty Customs/Punk Majesty Streetwear!

Downtown: Tell us about yourself, who you are as a designer.

Alisha: I’ve been at a teenage punk rocker since I was 14. Music has always been my driving force. The Ramones were probably the first band that I was super attracted to. When I was 10 years old, I saw Rock And Roll High School, and I didn’t know that was a real band. I just thought it was a movie, and I loved the movie so much. I watched it twice, like back to back at age 10, and it wasn’t until I was 14 that I actually found out that was an actual band and not just a movie. And I was like, so excited about that. So I’ve always like been very attracted to punk rock and eclectic style.

I started making my own clothes and designing and customizing around 14/15, and I even got sent home from school for it. It started then, you know, and I was never, ever planning on doing a clothing line. Like I said, I always loved music. So I went to college to be a music publicist, and everything changed. Right when I graduated it was 2001. Also the year of MP3’s, and the whole music industry just changed. And I did PR for local bands in San Francisco for two years. And then I moved to LA to see if I could make it work there. And it’s really who you know there, and I didn’t know anyone, so it just didn’t work out.

And I decided I would rather live in San Francisco and do anything than have my dream job in LA. So I gave that gave up that dream and I stopped doing PR for a minute, but I was always writing for this music website for like 12 years from 1999 until 2010 called cool girls with three R’s, which totally dates me, but you know, the Riot Girl movement.

I was never money motivated, but I always had these standout fashions. So whatever I was wearing, people noticed me. They would always ask me if I was in a band or if I have a motorcycle. I don’t have either, but it just sort of all happened accidentally because I love music and I love stand out statement, fashion. And so I was also bartending at music venues for like 12 years, just, you know, doing a bunch of different stuff like creatives do, and all of a sudden I lost my voice. I was having a lot of issues with it. And doctors told me I had to stop talking, and we didn’t know exactly what was wrong for 10 months.

And so during that time I was super bored. I couldn’t talk, I was stuck at home, and I started going through my closets to try to make money and sell what was in there. And I started painting on jackets that weren’t good enough to sell. And that was my experiment. And I took pictures, shared it on social media, and people loved it. And my friends almost forced me to start a clothing line. They really pushed me. And I said no. I said, no, I don’t want anyone to have what I have. I don’t want anyone to wear what I make. It’s just for me. And then two days later I kind of caved. And so I started making it, and I did my first public event at a punk swap meet in 2015 in San Francisco, and a bunch of the jackets sold and a bunch of people really were into it.

And so that’s how it all started. But I feel over the, you know, last many years I’ve really perfected it. I started with suit jackets, and then I expanded to vests ties, gloves. I make these gloves that have spikes on them, but they’re kind of elegant. I got the idea walking the streets of San Francisco where it can be really dangerous. I was wearing spiked gloves. Nobody would mess with me. And so that idea just came from self defense and people seem to love those.

And then I started making leather jackets almost on accident again because I ordered a custom leather jacket from a designer, a male designer. And the experience for me didn’t go well. It took three months, the communication was bad. I felt I wasn’t really heard, and it was really expensive. In the end I got it and it didn’t fit me well, and I just wasn’t happy. And when I told him I wasn’t happy, he really didn’t care. And I was just so mad. It took so long. I just started doing it myself and doing it better. I try to do leather jackets that cater to women’s curves and women’s bodies, whereas that other designer doesn’t do that. Because he’s not a woman, and that’s fine. He does great work, but I think it’s great work maybe for men. So I was always trying to design for women.

Alisha: Upcycled suit jackets is what I started with. I knew that that fashion was such a bad culprit of our environment, you know? Fashion waste is the number two cause of waste in the world. And number one is oil. So fashion and fast fashion are really, really bad, but I didn’t know that in 2015, when I just started only doing upcycled pieces, that was just my budget. Then when I found out, you know, that that was really a thing, I was like, this is cool because I’m actually doing something I can be proud of environmentally too. I started out just doing upcycles and then when it got to be custom leather jackets for women, I couldn’t find upcycled ones that would fit our bodies.

So that’s where I kind of moved into some new pieces, but I still do a lot of upcycles. I was only doing custom for a long time. And then during the pandemic, nobody cared and nobody wanted custom leather jackets or custom suits because there was nowhere to wear that stuff anymore. I was like tired of wearing, you know, all black and workout clothes just for my daily nonsense, walking around the neighborhood or doing errands during lockdown. And so I had the idea of making my statement pieces casual and for every day, like where I feel like I’m making a statement and looking cool, just walking the dog. And I came up with this whole streetwear concept of affordable eco-conscious streetwear.

And I worked on that for a year and basically a year ago this week I launched that. Each piece is made when the person orders it, so there’s no excess inventory. Nothing’s going to go to a landfill because nothing is made unless it’s ordered. I carried over the empowering statements I was writing on suit jackets and then put it onto streetwear. I do mesh tops, joggers, bomber jackets, t-shirts. So I have two separate sites because to me it’s kind of two arms of the brand. So it’s Punk Majesty Customs and Punk Majesty Streetwear. And with the street wear, everything’s under $115 so it’s affordable.

Downtown: So let’s talk about fashion week. Are you excited? What are you looking forward to?

Alisha: I wish I could say I’m excited. I’m just so stressed having to deal with all the minutia. I am my own team. But what I’m looking forward to is it being over. That’s not a cool answer at all, but I haven’t been able to visualize it and be excited about it because I’m working 12 hour days by myself. I know I can do it. There’s zero doubts. It’s just that, because I don’t have an assistant or anyone helping me, I have to be a Type A personality because this is my one shot. I’m never going to be able to afford to do something like this again, unless this experience opens some doors for me and people know I exist and I start to really make money with this.

Downtown: Is there anything you can share about your fashion week collection? Are you doing something new, your favorite pieces? What’s it going to be like?

Alisha: It is going to be very different than if someone looks at my website. It’s a lot of older stuff, so I’m showing a mix of the custom work and the streetwear and how they can be worn together, and I’ve added some jewelry. So each look might have a custom jacket with a street wear shirt and jewelry that I made and gloves that I made. So each look might have four pieces of mine, and they’re all different price ranges. So there’s something for everyone.

Downtown: Do you have a favorite piece you’ve created?

Alisha: I have this leather jacket that I made for me, and I’m going to show it on the runway, but I can also make it in all sizes for other people. The arms are painted an emerald turquoise color shift. So the color shifts in the light. So it looks kind of different in different lights and it’s studded. And on the back it says, Talk Is Cheap Actions Speak, which is sort of my motto for life because my pet peeve is people saying that they’re going to do something and they don’t do it. A lot of my t-shirts and my hoodies, like my first pieces that I did that were like my affordable stuff, my t-shirts and hoodies, they all say that.

Punk Majesty is also looking for a new home in New York! If you know of any stores that fit with the Punk Majesty vibe, reach out to Alisha of Punk Majesty at punkmajesty@gmail.com.