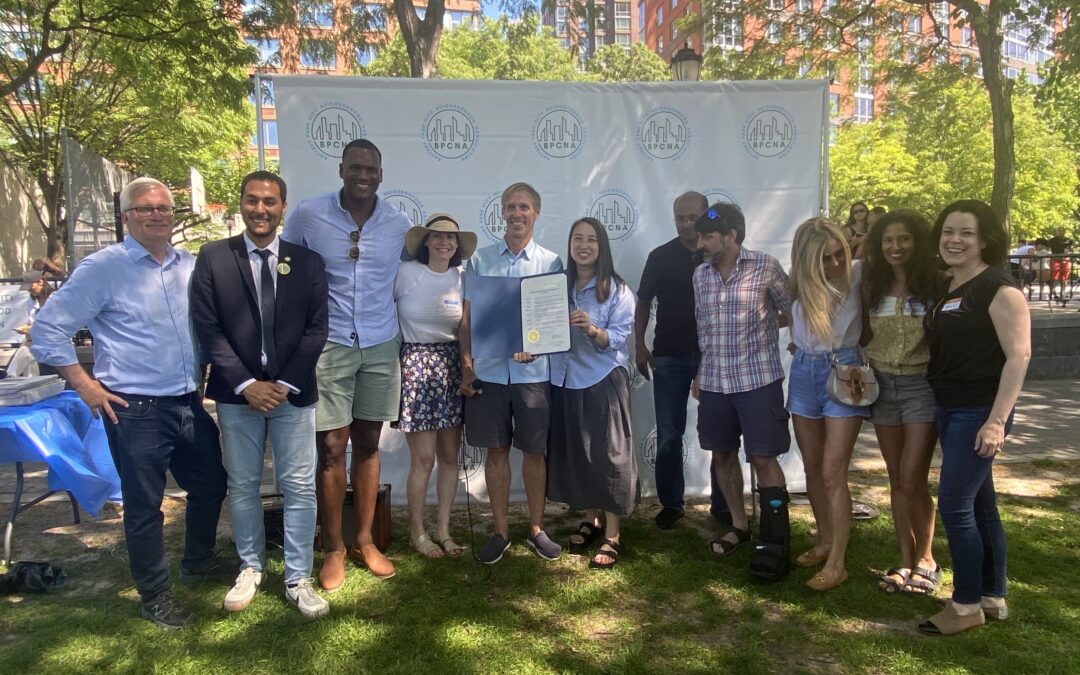 Last Sunday, hundreds of families came out to Battery Park City Neighborhood Association’s (BPCNA) Block Party in Rockefeller Park. The block party celebrated its family-oriented community with complimentary children’s activities, food and ice cream – all on the beautiful green lawn surrounded by trees along the Hudson River. The celebration also marked the one-year anniversary of the residents’ #PAUSEFORSAWS fight with former Governor Andrew Cuomo and his Battery Park City Authority (Authority) against the installation of a concrete monument that would have removed the green lawn and many of the park’s trees.

There were also victorious announcements about the NY legislature, passing two important bills for which BPCNA had been advocating for the past year. In a rare show of unity, federal, state and city elected officials and their opposing candidates agreed that BPCNA was instrumental in passing these two important bills and they all support their passage into law. In a call to action, they all urged community members to contact Governor Hochul to express their support. As an added surprise, Asssemblymember Yuh-Line Niou presented an official Citation issued by the NY State Assembly, recognizing BPCNA’s contribution to the community.

The first bill requires a majority (5 out of 9) seats on the Authority’s board to be occupied by primary residents of BPC. “We will finally be able to have majority resident representation on the Battery Park City board,” said Assemblymember Yuh-Line Niou (District 65) to cheers and applause.  She is now running for Congress. Niou worked hard together with support from Assemblymember Charles D. Fall, to push the bill. New York Senator Brian Kavanagh helped get the bill passed.

“I’m so happy to be here in this community, I gotta say, it’s been a while since I was familiar with some of the issues that were related to Battery Park City, because of Yuh-Line, and how she would advocate for this community,” said Hall.

The second bill is an important initial step in providing affordable and stabilized housing in Battery Park City through government programs for qualifying tenants (SCRIE & DRIE), senior citizens (SCHE) and disabled homeowners (DHE); plus a long-overdue 99-year extension of the master ground lease, which allows the Authority to extend all of BPC’s residential and commercial ground leases .

BPCNA’s next call to action is for the Authority to revisit their design and procedure for reconstructing two of BPC’s parks, Wagner Park and Rockefeller Park. Wagner is slated to start reconstruction this summer as part of an estimated two-year shutdown. Councilmember Christopher Marte will be speaking about the cause at a Town Hall event that will be held at the Museum of Jewish Heritage on June 15, at 9am. A Zoom option will be offered.