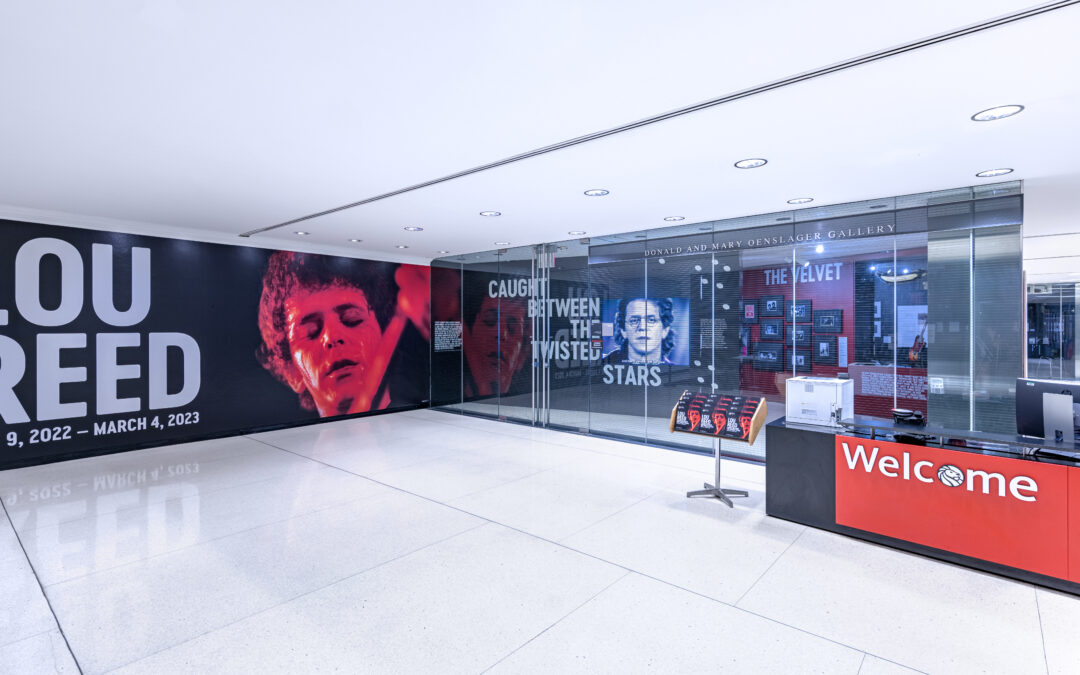 When you open the doors of Caught Between the Twisted Stars, the new Lou Reed exhibit at the New York Public Library (NYPL), you won’t find ‘Rock n Roll Animal,’ Lou Reed; rather you’ll find Lou Reed the poet exalting at the collapse of Manhattan in verse. The exhibit introduces a man worn tired by his own rock mythology; his opaque shades traded in for translucent frames, coarsely admitting, “it’s hard to give a shit these days” suggesting that perhaps a lot of work went into maintaining the ‘take no prisoners’ rock n roll persona for which he was readily identified for most of his public life.

As much as the exhibit positions Reed first and foremost as a writer, it also invites visitors into the story of an artist as told through tour memorabilia, demo tapes, receipts from Max Kansas’s city (a favorite Warhol haunt), live performances, and interviews. Viewers are also offered a glimpse of his influences, which range from the harmonic yearnings of Doo wop groups, to the dazzling poetry of Delmore Schwartz, and who he subsequently influenced, which range from Metallica (no surprise) to Vaclav Havel, the former president of the Czech Republic (what?).

Over the course of his career, Reed released 22 two studio albums, three with The Velvet Underground, and 15 live albums, but that’s not the point of Caught Between The Twisted Stars. The exhibit positions Reed as one who treated rock n roll as a vehicle for his poetry. Forget the blistering solos of Robert Quine across the Blue Mask (1986). Dive into the portrayals of a childhood procured by electroshock therapy and Levittown era denial as described in the gritty lyrics of “Kill Your Sons” which you can find scrawled onto a piece of notepad paper toward the back of the exhibit’s third room. The exhibit elucidates how Reed often came to terms with himself in his songs, feeling like the retrospective of a literary figure told through the set pieces from a rock opera.

Caught Between the Twisted Stars is a collaboration between Jason Stern, Lou Reed’s former assistant, musician Don Fleming, and Caitlin Whittington, Associate Director of Creative Design and Exhibitions with her team at NYPL. Remarking on how it all came together, “It was almost twice as big as what it ended up being. Don and I, my co-curator, went a little crazy with casting a wide net on what we thought were interesting enough artifacts to put on display. And then Caitlin and her team kind of did their best to squeeze it all in, and it was just chaos,” says Stern. “And then Laurie Anderson (Lou’s former partner) she kind of rang us in. She was like, ‘Guys this is way too much you need to cut this down’.”

Perhaps the most astonishing inclusion in the exhibit is a demo tape Reed recorded during his Syracuse days, which contains some of his most memorable songs. Here’s the catch: none of them sound anything like the avant garde odes to opium fixes and character studies of the New York underbelly that appear on the now famous records; rather the renditions of “Heroin” and “Waiting for the Man” sound like the croonings of an aspiring coffee house folk singer.

Fluidity is a big theme of his life as well as his work, which is best represented by the room on the exhibit’s second floor, which alternates between playing his once reviled, now celebrated formless rock record Metal Machine Music, and his Hudson River Wind Meditations compositions which he recorded to accompany his tai chi practice. Lou falls between the extremes represented by Metal Machine Music (his excesses) and the Hudson River Wind meditations compositions (his transcendence) ; those are the North and South Pole for which the entirety of his work and himself falls in between… under the twisted stars. Lou Reed: Caught Between the Twisted Stars will be on display at the New York Public Library for the Performing Arts until March 4th, 2023. Admission is free of charge. For more information, visit nypl.org.