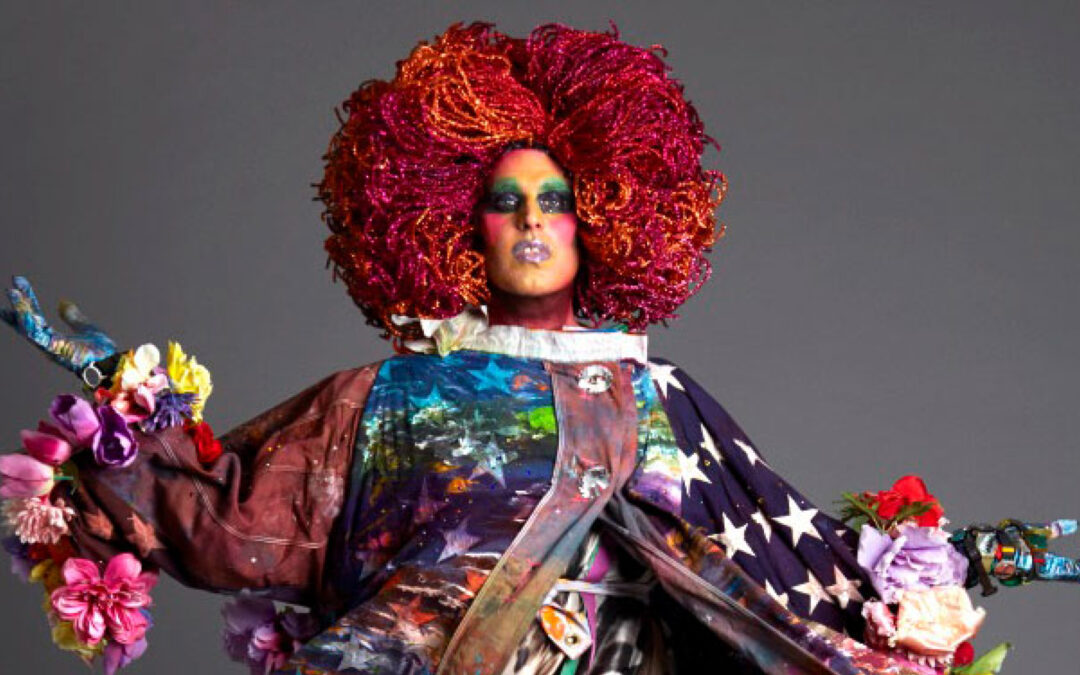 Ingenious designer Machine Dazzle is set to have his first solo museum exhibition this fall, at the Museum of Arts and Design. Queer Maximalism X Machine Dazzle, opening Sept. 10, is a colorful two-floor showcase of Machine Dazzle’s work, featuring 80+ pieces over the past 20+ years, exploring his connections with numerous overlapping creative communities, spanning cabaret, drag, theater, and New York nightlife.

Machine Dazzle is particularly renowned for his collaborations with actor Taylor Mac. In 2016, they worked on a performance art concert production, Taylor Mac: A 24 Decade History of Popular Music; they were nominated for a Pulitzer in Drama. In 2019, Machine Dazzle did another show, Treasure, at The Guggenheim Museum. He recently worked on a film with Godfrey Reggio, that will be shown at this year’s Santa Fe International Film Festival. “I’m presenting this multidimensional universe -there’s atmosphere, there’s costume, there’s music, there’s video, there’s performance. I’m all of those things.”

Machine Dazzle, (ne Matthew Flower), is a towering presence, even in his everyday clothing, at 6’5”, with overflowing curly hair. Growing up in a conservative family and moving frequently, from Philadelphia, to Houston, to Idaho , wasn’t easy. “I always knew I was different.” Halloween offered a small window of opportunity to begin to explore with different looks. But he adds, “After my mother died in 1996, my father and I finally had one of the best conversations we ever had and he was like, ‘I knew you were gay from when you were two years old.’”

When asked about earlier influences, Machine Dazzle recalls as a child watching an episode of Love Boat, that featured fashion designer Halston. “I remember this handsome person and all these beautiful women in colors, and sequins, and I was like, what’s that?”

After studying fine arts at the University of Colorado, he bought a one way ticket to New York. “Everything exciting that was happening was happening in New York. Madonna. MTV.” He embraced the 90s club kids scene, and loved to dance “energetically,” earning him the nickname “Machine.” A group of performers at the clubs known the “Dazzle Dancers” asked him to make their costumes, and as time went on, he took on the name Machine Dazzle. “The Dazzle Dancers and Taylor Mac were often on the same bill,” he explains. “Taylor was gluing things to his face, and playing the ukulele, very queer. I loved his aesthetic, he loved my aesthetic, and we just started collaborating.” Taylor frequently suggests to him ideas, “to see how I’m gonna react,” he says. “Just little bits, to put out in the universe, because you build; you can’t just start something big. You build a foundation, you have to start somewhere, you have to experiment.”

Taylor Mac and Machine Dazzle on stage in Taylor Mac’s A 24 Decade History of Popular Music. Photo by Joseph Beyer.

In his residency space at MAD, Machine is surrounded by dozens of his colorful creations, each more striking than the next, as he diligently prepares for the installation. His imagination knows no limits. In addition to traditional materials such as sequins, feathers, beads, and glitter, there are offbeat, found items such as ping pong balls, hoop skirts, slinkies, soup cans. When asked how long it takes to make one of his costumes, he says “sometimes it’s a day, sometimes it’s a month.” They’re not just packed away after they’re used. “I consider them living sculptures that are worn, and I continually change them, and they evolve.”

During the pandemic, Machine Dazzle went through painful breakup. “I was making these masks, I was staying creative because I just had to,” he reflects. “So I just became a part of the online Instagram movement, of people doing things online and posting it. Instagram as art. What I didn’t realize this whole time was that the New York Times had been watching me and in 2020 in December, they came out at the end of the year, ‘Best of Theater 2020,’ -in a year where theater completely didn’t exist…Machine Dazzle’s Instagram, was on that list! So, that was the silver lining. Things evolve, things move forward, things are continuous.”

Throughout the exhibition, there will also be a variety of events, including talks, and screenings of films that influenced Machine Dazzle, starting with Clash of the Titans (Oct. 13), Star Trek: The Motion Picture (Oct. 25), and Eyes of Laura Mars (Oct. 27), with Faye Dunaway.

Machine Dazzle is also completing his first album, Treasure, a collection of 13 songs about his mother. His music director is Viva DeConcini, who is also Taylor Mac’s guitarist. The album will have a release party at Joe’s Pub Oct. 21.

“My costumes are stories. They’ve been described as musical. And I will say that…nothing visual influences me as much as music does.”

For tickets to Queer Maximalism x Machine Dazzle, or the Museum of Arts and Design, visit madmuseum.org