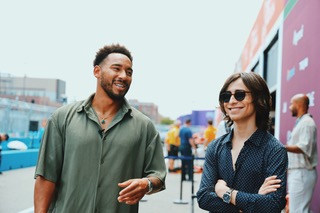 You probably recognize Aidan Gallagher from his role in The Umbrella Academy–which just hit over 125 million hours viewed–but on top of playing Number Five in one of Netflix’s most popular original shows, Gallagher is also incredibly vocal about fighting the climate crisis.

Being part of The Umbrella Academy has given Gallagher the unique opportunity to use his social media platform for the good of the Earth. “Being an actor who is also concerned about environmental issues, as I go on to new projects and my social media following grows, I’m that much more obligated to make sure that I’m using it for something good and not something which would otherwise be sort of a vain enterprise. It’s a certain portion of my job to maintain that,” he said. With 7.5 million followers on Instagram and another 5.5 million on TikTok, Aidan has a considerable reach, and as a United Nations Environment Goodwill Ambassador, his social media platforms are even more influential, and he’s well aware of the power his voice holds: “I want to make sure that I’m wielding this thing–that I was lucky enough to somehow get–appropriately.”

Last weekend, Gallagher stopped by the Formula E race in Brooklyn to promote electric racing and sustainability. Together, he and Envision Racing have partnered up on #TreesWithAidan and The Race Against Climate Change. With this project, people have the opportunity to take a free pledge and help fight climate change in a way that works best for them. “There are ten different pledges you can take. I took the climate pledge to eat sustainable meals, and anyone who goes to this site can choose any of the pledges, and Envision will plant a free tree,” Gallagher said. “Which is amazing because of how easy it is for people to make this difference. Our goal is 1 million trees, and I think we’re gonna make that.”

Envision Racing is just one of the teams in the FIA Formula E World Championship, a championship that focuses not just on the race, but on the planet as well. Envision is at the forefront of groundbreaking changes in electric cars, making them the perfect teammate for Gallagher. “This is going to change the way that cars are built, as they are on the edge of figuring this out and pushing these ideas forward, learning how to expand the battery life and shorten the recharge time and things like that. They’re going to make breakthroughs that are going to be really useful in the transportation industry,” Gallagher said, when I asked why he chose to partner up with Envision Racing.

Between #TreesWithAidan and Envision Racing’s innovation in electric vehicles, Aidan Gallagher and Formula E are making strides in the fight against climate change. I took the “Waste” pledge on the Envision Racing website to recycle more! What pledge will you take?