The Met Launches Exhibits Exploring The History Of American Fashion 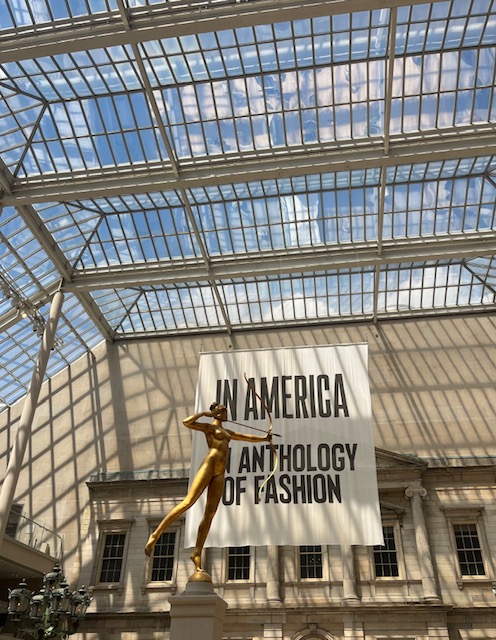 Entrance to In America: An Anthology of Fashion, Photo: Julia Meyer

Starting in September 2021, The Metropolitan Museum of Art’s Costume Institute launched a two-part exploration of fashion in the United States with the opening of In America: A Lexicon of Fashion. The second part of the fashion exploration, In America: An Anthology of Fashion, launched last month.

Found in the Museum’s Anna Wintour Costume Center, In America: A Lexicon of Fashion establishes a vocabulary of American fashion based on its expressive qualities.

Approximately 100 men’s and women’s ensembles dating from the 1940s to the present are enclosed in scrimmed cases meant to represent “patches” of a quilt. The ensembles are organized into twelve sections that explore various emotional qualities: Nostalgia, Belonging, Delight, Joy, Wonder, Affinity, Confidence, Strength, Desire, Assurance, Comfort, and Consciousness.

Presented in collaboration with The Met’s American Wing, In America: An Anthology of Fashion highlights narratives relating to histories presented in the museum’s American Wing period rooms. Men’s and women’s clothing dating from the 18th century to the present are featured in period rooms spanning from circa 1805 to 1915. The rooms in the exhibit include a Shaker Retiring Room from the 1830s, a 19th century parlor from Richmond, Virginia, a panoramic 1819 mural of Versailles, and a 20th century living room designed by Frank Lloyd Wright.

Surveying more than 200 years of American domestic life, the rooms showcase a variety of personal, political, aesthetic, ideological, and cultural stories. These narratives are reflected through a series of three-dimensional cinematic “freeze frames” produced in collaboration with notable American film directors. Overall, the exhibit explores the role of dress in shaping American identity and addresses the complex histories presented in each room.

After viewing both parts of the two-part exploration of American Fashion, visitors can grasp both the history and significance of fashion in the United States.