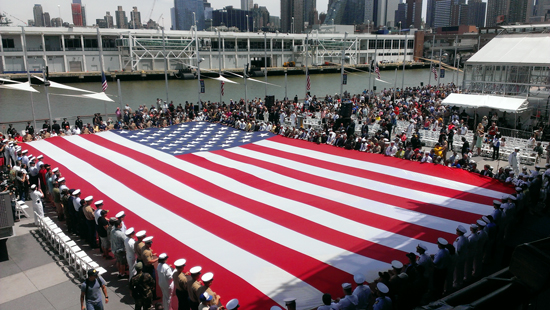 Memorial Day ceremony aboard The Intrepid Museum, which takes place during Fleet Week.

Fleet Week New York 2022 is scheduled to begin early Wednesday, May 25th with a ceremonial parade of ships consisting of U.S. Navy, U.S. Coast Guard and Royal Navy vessels passing by the Statue of Liberty, Fort Hamilton, and One World Trade Center, from 6 to 8 a.m., as they transit the New York Harbor.

The parade of ships is scheduled to include the following:

The ships can be seen along the Hudson River from Battery Park to just south of the George Washington Bridge. Fort Hamilton is scheduled to conduct an 11-gun salute to the flagship, USS Bataan, as the ship passes by.

The Intrepid Museum will be hosting its own Fleet Week activities beginning May 27, with its annual movie night on the flight deck (Crimson Tide.) Throughout the weekend, explore a variety of displays, activities and demos including the U.S. Marine Corps, U.S. Coast Guard, USO and even some antique military vehicles. The weekend will conclude on Monday, May 30 with the Museum’s annual Memorial Day ceremony.

Fleet Week New York is scheduled for May 25th through 31st and will include general public ship tours, aviation demonstrations, military band performances and interactive displays throughout the tri-state area.

Birth of Punk Exhibit at The Seaport Presented by The Great Frog, Morrison Hotel Gallery, and the Hall of Punk, The Birth of Punk pop up exhibit takes visitors on a journey through the history of punk in New York City using photography, artifacts, eyewitness accounts, and music that defined the genre. Visitors are guided through an audio narration on Spotify that is paired with iconic punk music. Photographers featured include Bob Gruen, David Godlis, Chris Stein, Glen Craig, Chalkie Davies, Lynn Goldsmith, Ebet Roberts, Norman Seeff, Allan Tannenbaum, Barrie Wentzell, among others. Entrance 25 Fulton Street.

In America: An Anthology of Fashion at The Met Museum. It is the second portion of a two-part exhibition exploring fashion in the United States. Men’s and women’s dress dating from the eighteenth century to the present will be featured in vignettes installed in select period rooms spanning ca. 1805 to 1915: a Shaker Retiring Room from the 1830s; a nineteenth-century parlor from Richmond, Virginia; a panoramic 1819 mural of Versailles; and a twentieth-century living room designed by Frank Lloyd Wright, among others. These mise-en-scènes will explore the role of dress in shaping American identity and address the complex and layered histories of the rooms.

QC NY Spa at Governors Island. Recently opened in March 2022, use summer days to take advantage of a spa filled day on Governors Island, enjoying the most incredible views of the Manhattan skyline.  There are steam rooms, saunas, and architecturally stunning relaxation rooms.

Stranger Things: The Experience NYC The fourth and final season of Stranger Things is on Netflix now! join Eleven, Dustin, Mike, Lucas, Max, and Will for a very special episode starring… you! Venture inside Hawkins Lab for a 1-hour immersive experience featuring a brand-new Stranger Things storyline, then explore an 80’s-themed Mix-Tape medley with food & drinks, special merch, photo ops, and much more.

Jean-Michel Basquiat: King Pleasure is a sprawling exhibit carefully assembled by those that knew him best, his family. It features a priceless collection of 200+ never before and rarely seen paintings, drawings, ephemera, and artifacts. It even features recreations of his NYC artist studio on Great Jones St. and the Michael Todd VIP Room of NYC’s Palladium nightclub. At the Starrett-Lehigh Building near the High Line.

The Fans Strike Back: The Largest Star Wars Fan Exhibition presents four decades worth of devoted fandom. Through fans’ eyes, immerse yourself in the saga with the largest private collection of official Star Wars items, including hundreds of life-size figures, models, one-of-a-kind sculptures, figurines, photos, posters, and costumes.